Electronic Frontier Bulgaria’s speech from a discussion 1 year ago

Good morning ladies and gentlemen, or should I say gentlemen officers. I will take the liberty to use fifteen minutes of your time and comment on the problem with a small presentation that I have prepared. 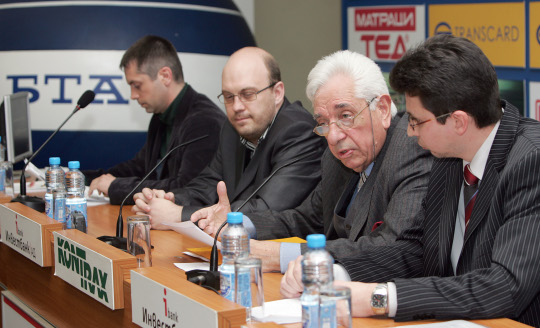 We think that the problem has several dimensions, first of which is the legal basis, as Mr. Ganev already mentioned, and which is distributed around the media network and I am sure that it will be discussed for a long time from now on.

Another dimension is human rights and Mr. Ganev spoke about them too. There are obvious contradictions in basic documents which are in the foundation of democracy in Bulgaria and the EU.
Another problem is the social problem and I am here to present the social and the technical problems caused by the regulation. The social aspect is the public lack of confidence in the services, in the state and in the way the information which people think as confidential will be used by those services. The technical problem, which I am not going to discuss at all, alarms many people, because there will be big expenditures and it will be very difficult these things to happen.

From business point of view the problem is very big and accountable, and it is somehow related to the social one, because business is probably the most affected side by the regulation. Business people are afraid that the information they generate may get in the wrong hands exactly because of those regulations.

As Mr. Ganev already mentioned the regulation was adopted on 7th of January 2008 and it was promulgated on the 29th of January with such a long name that if you come across it in a website or in the State Journal you wouldn’t like to read it at all. The thing is that we read it and realised what stays behind two pieces of paper and one allegedly transposed directive in our legislation.

Surveillance and retention of information for the citizens’ electronic communication is a policy which widens the rights for police surveillance. At the same time it violates many of the instruments guaranteeing human rights and the lawyers we are working with, will mention that very soon.

The problem also affects the data protection directives, the European Constitution of Human Rights, the Human Rights Convention and the Constitution of the Republic of Bulgaria, all the founding documents without which we would not exist as a state and as a community.

Data retention, if you allow me to use some technical terms, means that the ruling people can interfere in your private life and correspondence or in your business regardless if you are a suspect, if you have committed a crime or not, and please note that they don’t have to report their actions anywhere! Under this regulation there is only one point, which obligates the Minister of Interior to report its use to the European Commission annually, but in the directive and in the regulation there are no, I repeat no guarantees if and how the information will be recorded.

If you want later I can show you how exactly this can happen. Another question is that there is no transparency, as we know in the MoI there is no transparency and neither there is a possibility for public control of those authorities. Excuse me, but I don’t trust the MoI. It is an old structure which hasn’t been reformed and it won’t be reformed soon. This turns data keeping into a risk for our civil rights, instead of a means for public protection. This information can be easily used for political and personal purposes. For a reference I can state the so called Kuyovich Case where a policeman from the town of Razgrad has used such information for Mr. Kuyovich’s wife location. That was a policeman who could easily access such information.

The directive, ladies and gentlemen, gives the right to every single MoI officer to use such information without any traces or records. And when, at some point you become “inconvenient” (for example the strike of the medical workers) such information is brought to light and used to lower your reputation. I am sure that everyone can imagine all the other ways this information can be used. This makes the state primary violator of its people’s rights. Principally the state should protect us. We should rely on our state to protect our rights and freedoms; we should not do it ourselves. Otherwise why do we need the state?

Now I will explain some technical stuff, I hope you will excuse me and if you have any questions you can interrupt me. What will be controlled and retained? Every Internet user has an unique number. It is for identification and it is called an IP Address. This information certifies the user in the world network. This information will be recorded and required. Moreover, the Internet provider is obliged under this regulation to do the so-called “user confirmation” together with the figures and letters which constitute your IP address.

The Internet provider is obliged to keep your personal data, such as full name, personal identification number, address of service provision. Your Internet provider in the neighbourhood will keep all that information for all the users of its service.

Also they will keep information what contacts you have, what you have communicated and with whom, how often, to whom you have sent electronic messages, when and how many times; with who you have spoken via Internet telephone, how many times and for how long; with whom you have talked through instant messaging services: the so popular Skype, ICQ, Jabber, etc, how many times and for how long, what you have done in the Internet on the principle of Behavioural Modelling. The colleagues from the State Agency for National Security would know what I am taking about.

The main argument of MoI in reply of Mr. Kamov’s parliamentary question to the Minister of Interior Mr. Rumen Petkov, was that the directive did not require contents. Excuse me, but in order this information to be accessible, the devices, which will be used for its collection, inevitably go through the contents of the message.

On the other hand, there is a case in the European Court, which is conducted because the e-mail and the personality you have as an e-mail address is also personal information and it should neither be collected. If we look from another point of view MoI will have such a system that if someone typed the name of the person I invented (I hope he doesn’t exist), with the fictional PIN, that someone will know the fictional person’s Internet activity for the last 24 hours or the last year, information with whom he/she has been talking to, location at that or the present moment etc.

This type of information can be used in different ways; the global trends for fighting terrorism allow making such connections between many people. This can be seen as someone always walking behind you and taking notes of who you are, where you go, who you are talking to; it is as if there was a service officer walking behind any one of us taking such notes.

The state imposes the obligation upon the Internet providers to take all the expenses and give the information through the so-called “passive access”. “Passive access” means that anyone can use this access without the provider that has collected it to know about that, i.e. it is obligatory that the provider does not know.

I am not sure if inside the MoI exists the so-called “self control” since the MoI is not subject to civil control. I am sure that this information can be used somehow. This is only one of the problem’s dimensions; we can also talk about information leakage through every MoI channel.

The problem is that free citizens are under surveillance; citizens who are not suspected in crimes, not guilty or accused. Maybe we are accused of being alive. Every Bulgarian citizen will be carefully scrutinized and information will be gathered for his/her personal and/or business life if they eventually become “inconvenient” to someone or if they eventually become criminals. As the saying goes, everyone can become a criminal at some point, but this does not mean that we should watch everyone. This, apart from contradicting the basic state documents and the Charter of Human Rights, contradicts something very important, which is being forgotten lately, and it is that the Bulgarian citizen is innocent until the contrary is proven. With the assumption that such information should be collected it turned out that Bulgarian citizen is guilty until the contrary is proven.

Can we be sure that the collected information will be used for combating of crimes? I am sure that the information which will be collected is ineffective, it is not fit for the purposes set by the MoI and the rest of the services. We can give many examples for abuses, I already gave two, and I can give you some more. This regulation does not help fighting terrorism, because the EU Directive was published right after the bomb attempts in the London tube. It may be a cliché, but fighting terrorism with mass surveillance is actually success for the terrorists. It is a complete undermining of our values, undermining of our way of living, and that’s the problem. Terrorism is the actual “winner” with this regulation if I may draw a conclusion.

Data retention is an aggressive method for entering into the private life of every one of us and it is as if there is always someone walking behind our backs, sniffing around our lives. So far we all know it was possible through the Law for Special Intelligence Devices. I am sorry that Mr. Yavor Kolev is not present here, he knows how the system works and I am sure he could give us some examples known to me too. This logics worked so far. We all remember that teenager that had threatened the President; he was caught for 15 minutes. Why don’t we keep working in the same way?

No research has been done in Europe to confirm the necessity of such a large data base. Can you imagine how big this database is? No? I can tell you it is huge. This information is confidential. It is something that belongs only to us; we don’t have to give it to someone else. People’s security is their right, but we have to decide and that’s why we are here, to what extent are we ready to sacrifice our freedom in the name of security. When I am giving something I want to be sure that the one taking it will take good care of this information. I don’t have this confidence in the state. I am living in Bulgaria for years, thirty and something, and unfortunately it has never showed that I can trust it.