Whether you know it or not, a Directive exists for the retention of data from our telecommunication services. It obliges to some degree the Member States to retain and keep for a certain period of time data, such as:

Video: Here you can see how these data can be combined to trace a person for the past years (in Bulgariab)

The Directive was implemented in the Bulgarian legislation through Regulation No 40 which introduces rules, contradicting many documents, as well as expanding the European document. Bulgarian thing as they say.

What was too much?
The Directive was passed in the European Parliament with great difficulty and compromises and only with a few votes for. The Directive and the compromises’ idea was that the data would be used for solution of serious crimes, violating state security. This exact compromise and its lawful definition were not stated in the Regulation.

The other big problem was that the Ministry of Interior and many other agencies, which later became the State Agency for National Security, could use those resources for every one of us without the necessity of any grounds or control, which I can bravely say, was guaranteed to them by Article 5 from Regulation No 40.

If you dig the Internet you will find more issues, but this is not the purpose of my posting.

What happened?
The Supreme Administrative Court abolished that Article No 5 in a case, won by the Access to the Information Foundation and the drama began.

New year, new approach.
Only days before the Parliamentary Transport and Communications Commission meeting a proposal for changes in the Digital Messages Act was entered by the MoI, copying the Regulation, including the Articles, abolished by the SAC, which contradict the Bulgarian Constitution and the basic principles of the European legislation.

We and the Association for Electronic Communication /AEC/ and other organizations responded adequately and alarmed the media, sent statements here and there, met Members of the Parliament just to explain what was the situation.

At the very meeting of the Commission it became clear that the MoI are entering new proposal, without the abolished texts, but with many other issues:

1. The grounds for tracing and using the information for every single citizen remain, because it has not been stated that this information can be used and processed only in case of a severe crime and there is no independent court or arbiter to prove it.

2. There is a proposal the data of all citizens, using communications like mobile phone and the Internet to be kept for 2 /two/ years.

3. There are no guarantees for the termination of the data

4. It is not possible for the citizens to see what kinds of data are being kept and who and for what purpose is using them.
5. There is no whatsoever punishment for misuse of these data.

In a few words, the proposal contradicts the Directive itself and there are no guarantees and protection of the rights of the users, which represent 90% of the whole state.

The text was approved by the Commission after an hour of senseless discussion with most of the arguments “against” disapproved.

“Protection of the Rights” action
Since there are no other ways to enter new proposals because of the Commission’s procedural rules and that means that everything is going to be decided on a plenary meeting of the Parliament. On the day after the Commission’s meeting Electronic Frontier started an opposition against:

We joined the national protest in Sofia and Varna and participated in all responsible media – more than 20 participations in 4 days, discussions with many partners, who I will cited later and information on what is going on. 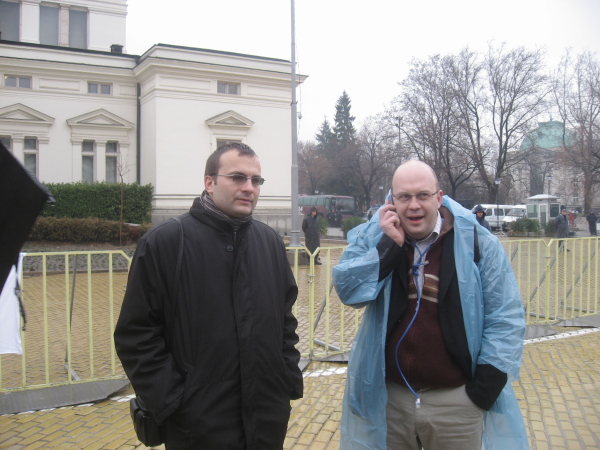 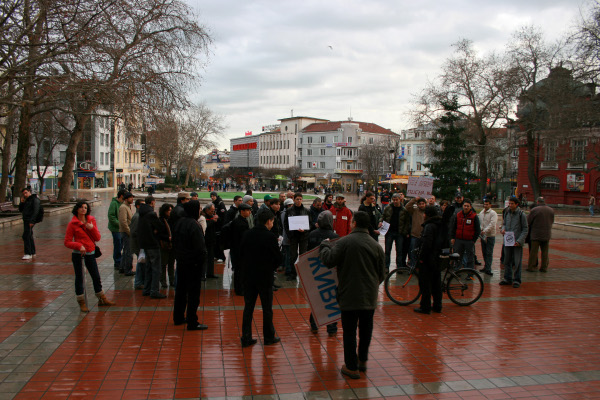 Of course, the protest did not achieve the desired effects, because of the MPs’s way of thinking and I repeat their criminal negligence for the important issues.

Me and the chairman of the United Democratic Forces Mr. Martin Dimitrov participated in the Commission meeting, which discussed another part of the Act. We were clearly informed that there was no point in discussing “old” problems from the past meeting, although the rules permit, if the Commission was WELL-INTENTIONED to approve editions, which would have been useful, but it did not happen anyway.

A journalist, who was sitting next to me at the meeting, said that what was happening resembled a market place and I couldn’t disagree. Everyone was talking, making noise, bargaining, inadequate remarks were exchanged all the time; even the chairman allowed himself to say that there was an Article, he could not understand, but he would propose it for voting. That’s classic! Also he appealed to the members not to be innovative and not to invent rules, which were not in the Directive?!?

And now
Now the issues are about to be discussed on a plenary meeting of the Parliament that’s why we shall act again to show our arguments to everyone who wants to hear us in order to achieve the citizens‘ digital rights.

The Proposal
We understand that this Directive is coming from the EU and we must implement it, but there is another way too. If we do not implement it, like Sweden did not, we will be sued (in the worst case) by the European Commission. We, Electronic Frontier clearly declared that we would bear the expenses for the trial if it happens. This is not populism, this is reality. This is the challenge which will not be accepted by the other side.